Be careful out there its wet!

Mobile Temptation And A Costly Fine.

On March 1st this year, the government increased the penalties for using a mobile device whilst driving. This followed an increase in the number of accidents – many serious or fatal – where a driver distracted by their phone was a contributory factor.

The hope was that by doubling the fine from £100 to £200, and the penalty points from three to six, it would be a major deterrent to those tempted to interrupt their concentration from the road ahead.

For drivers within the first two-year period of passing their test, the penalty is even harsher. They face an immediate ban from driving.

However, according to a poll of 1,500 drivers, by Co-op Insurance, the deterrent effect might not be having the desired result.

Eighteen percent of those questioned admitted they still use their mobile to reply to emails or browse Facebook while on the road. Many more owned up to being distracted by ‘tweaking’ their sat-nav app or changing the music playing from their phone.

Government guidelines are very specific. The only time it is permissible to use a phone while in control of a vehicle is:

This also applies to anyone who supervises a learner driver, or who pays at a drive-through restaurant by using their phone while the engine is still running.

In short, using any mobile device in your car which has the potential to distract you from the road ahead, could provide a reason for the police to stop and question you.

The only sensible solution appears to be to place your mobile in the boot, or the glove compartment, before setting off.

Removing temptation could save you a costly fine – or worse!

The New Realities Of Speeding!

Most of us are guilty of speeding at one time or another. The authorities have traditionally allowed a tolerance of 10 percent of the posted limit plus 2mph before issuing a penalty. This meant if you were travelling at 57mph in a 50mph zone you were likely to get away with it – maybe!

However, this was based on giving the benefit of doubt to a driver and the questionable accuracy of the existing equipment.

With reliable technology now installed in most vehicles and the desire of government to make our roads even safer, the discretionary ‘leeway’ is likely to be withdrawn.

In addition, magistrates are to be issued with new guidelines for speeding offences. These will place speeding misdemeanors in one of three bands:

Band A – for the least serious speeding offence

Band C – for speeding offences regarded as being very serious.

The guidelines and penalties issued by the Sentencing Council for England and Wales are set out in the document below:

The full document can be read here

As you can see, the new penalties are now based on a percentage of weekly income of the offender as follows:

Band A – starting at 50 percent of weekly income

Band B – starting at 100 percent of weekly income

Magistrates still have the power to show leniency if mitigating circumstances can be demonstrated.

Additionally, they are still at liberty to add points to a licence or disqualify a driver either temporarily or permanently.

It appears the increased cost of breaking the posted speed limit is about to outweigh the gamble of getting caught!

The relationship between cyclists and motorists is similar to that of oil to water – they are not a great combination when using the same surface. Both travel along many of the same roadways and both seem to think they have right of way over each other.

Social Media sites like You Tube entertain us with a multitude of clips posted by aggrieved helmet cam wearing cyclists, who have recorded near misses, and often violent confrontations, with angry drivers while on the road.

A common theme of these ‘incidents’ is the overtaking motorist passing far too close to the cyclist and/or cutting in too quickly once they thought they had passed their two wheeled nemesis.

Many motorists assume that a cyclist should keep to the far left of the lane in which they are travelling but according to the Highway Code, it is permissible, and encouraged, to use the full width of the carriageway. It is the responsibility of the passing motorist to wait until the road is clear enough to attempt a full passing manoeuvre, leaving a gap of at least a metre between themselves and the cyclist. They should then make certain they are well ahead of the cyclist before returning to the lane they were originally in.

It sounds simple when written on paper, but when driving through congested towns and cities where heavy traffic fills the oncoming lane, it leads to fewer opportunities for executing a text book overtaking manoeuvre. That leads to frustration for the motorist and often an incident.

However, there are no excuses for ignoring the rules. Many police forces have recently set traps to catch impatient motorists. They use a Lycra clad officer riding a bicycle fitted with cameras. If an overtaking motorist passes too close, or cuts in too quick, they are stopped further down the road and either ‘spoken to’ or issued with a penalty notice.

Of course, not all drivers are bad and not all cyclists are good. There are members from both camps who take chances hoping they can get away with it.

What we have to remember is: we are all here to stay and where dedicated bike lanes are not available, we’re obliged to use the same road space.

Maybe it’s time for everyone to demonstrate some consideration – whether we’re on two wheels or more?

Time To Take A Breath – Or Two

According to a recent survey of road users, the following behaviour annoys drivers the most:

One word could probably describe all of the above – frustration!

However, with the exception of congested roads, we are all probably guilty of one, or more, of the other annoying habits. After all, everyone suffers lack of concentration or tiredness at some point.

Middle-lane hoggers are considered selfish by the majority of complainants while a staggering 37% of drivers are not even aware it’s a driving offence – despite the introduction of on-the-spot fines in 2013.

66% of drivers believe the lanes on motorways are designated by speed with the inside lane being for slow traffic, the middle lane for ‘coasting’ and the right hand lane for fast driving. They are unaware of the wording in the Highway Code stating you should move over into the left hand lane as soon as the road ahead is clear.

This might help to explain the behaviour of the tailgaters. Might they be thinking that as they are driving faster (often in excess of the legal speed limit) than the car in front, they have the right to be in the ‘fast lane’ and everyone else should be forced to move over to let them pass? Surely, it’s a dangerous belief to hold.

So what can we do, as drivers, to relieve the frustration we feel?

Getting angry does not solve the problem but adds to the frustration and, thereby, increases the odds of being involved in – or causing – an accident.

If someone in front is being a lane hogger, fight the temptation to ‘undertake’ them, or to turn yourself into a tailgater.

If the person behind is tailgating you, resist your instinct to frustrate them further by flashing your brake lights or by slowing down. Simply move over when you can, and let them pass.

Congested roads cause frustration and are often the result of accidents. Accidents are often caused by frustrated drivers. It can easily become a vicious unsolvable circle.

Driving can be enjoyable. All we have to do is take a breath and allow some understanding for others who aren’t the perfect drivers we know we all are!!

Information released in response to a Freedom of Information request by the Institute of Advanced Motorists has unearthed five drivers who individually have gained more than 37 points on their licences.

It is generally regarded that an individual who has accrued a total of 12 points, within a period of three years, will be disqualified from driving for a given period by a court. However, a judge is able to show leniency if it’s considered a ban will cause “exceptional hardship” to the individual.

So far so good.

Both of these drivers had claimed they would suffer “exceptional hardship” if they were disqualified from driving.

While it’s a good thing there is some leeway regarding an individual’s circumstances, surely there should also be consistency in the application of the law? After all, there will always be those who will flout the law and try to exploit loopholes to save themselves the inconvenience of a ban once they are caught.

Speed limits are there for a purpose – however frustrating they can sometimes be to an individual driver. They attempt to set a common standard and protect all road users from the excesses of the minority.

But, most importantly, they are there to try to protect us all from suffering the “exceptional hardship” of being involved in a road traffic incident, whether we are cyclists, drivers, horse riders or pedestrians.

Hunting Down The Hogs… 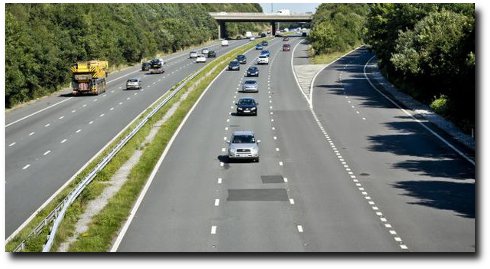 It’s taken two years but finally someone has been punished for ‘hogging’ the centre lane of a motorway.

This week, Leeds Magistrates fined a motorist £940, with five penalty points on his licence, for inconsiderate driving. He is said to have declined numerous opportunities to pull into the left hand lane. The prescribed fine is £100 and three points, but the man had failed to attend court after ‘assuming’ it was only a minor offence.

Prosecutors claimed the offender had been observed blocking off at least six cars, who’s drivers had subsequently been forced to brake and overtake, when he had enough time and space to move into the inside lane.

But, it seems he is not alone!

A poll last year, by insurers Direct Line, found that 43% of more than 2,000 drivers questioned, admitted they regularly drive in the middle lane because it was an “easier way to drive” and “saves me changing lanes” A further 18% claimed it was just a “driving habit”.

However, officials say motorway capacity is being reduced by around 30% because of middle lane ‘hoggers’

How much in time and expense is that costing the logistics industry – and ultimately the consumer – each year?

If police continue to concentrate on sourcing drivers committing this offence, traffic flow on motorways will either speed up considerably, or motorists will be providing the Treasury with an even easier source of funds than we do now!

You can’t say we haven’t all been warned!